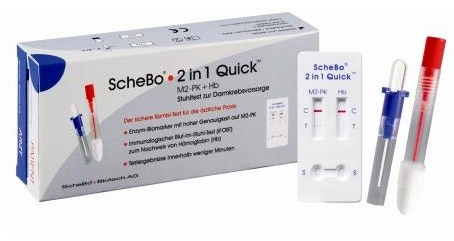 M2-PK is an innovative biomarker, which has been identified as a key metabolic enzyme in colorectal cancers and polyps. The dimeric isoform of M2-PK is completely independent from the presence of faecal occult blood and specific for a change in glucose metabolism, which occurs in tumours (direct testing). M2-PK is an ideal screening marker to discover even the early stages of colorectal cancer because it can detect both non-bleeding, as well as bleeding, polyps and colorectal cancers.

The modern immunological faecal occult blood test (iFOBT) for the detection of human blood (haemoglobin) uses a totally different approach from the M2-PK test. It is based on the presence of a source of bleeding in the bowel (indirect method). The iFOBT, which exclusively uses antibodies specifically targeted at human haemoglobin, has been clinically proven to detect more bleeding-associated colorectal cancers and polyps than traditional guaiac-based FOBTs (gFOBT). Its superior specificity for lower gastrointestinal bleeding compared to gFOBT reduces the number of false positive test results, making it an improved screening tool for the presence of human haemoglobin in the faeces from bleeding colorectal cancers or polyps.

The strength of the new ScheBo® • 2in1 Quick™ test (M2-PK + Hb) particularly lies in the fact that the enzyme biomarker M2-PK and the human haemoglobin (Hb) are very different biomarkers that are completely independent of one another. Therefore they each make their own important contribution to bowel cancer screening. By simultaneously testing for M2-PK and Hb both non-bleeding and bleeding colon cancers and polyps can be detected

Enzyme biomarker for the detection of M2-PK in faecal samples

Please check with ScheBo Biotech if this product is available in your country.